The owners of this beautiful Victorian house in Malvern wanted something quite special.  Pepper Design designed and installed their last kitchen in St Kilda so we had previously gained their trust and were left with an open brief.

Our design team came up with four options to suit the various spaces in this house but it was obvious the kitchen belonged in what was the living space. This brought with it a few challenges including a split level floor.

The real breakthrough in the design was when we proposed rearranging the areas behind the kitchen. Originally there was a corridor running from the right hand side of the proposed kitchen all the way down to the “Bedroom Zone”. By adding a new door to the left of the kitchen we were able to maintain access to the bedrooms and add storage behind the kitchen layout. The old door became an entrance to a much larger laundry area which we essentially divided in two to provide the Butler’s Pantry, a space that houses the big fridge and noisy coffee machine.

With the tall and bulky items tucked away we were able to plan a long island bench as the key feature of the new design. We positioned the Island bench right on the change in floor levels to maximise it’s length and used a dramatic 100mm thick Statuario marble for drama. The back bench is Stainless Steel which relieves the pressure on the natural marble. We suggested the Gaggenau In-Bench Steam Cooker beside the Gas Cooktop. We also supplied a 600mm Gaggenau Oven and the exposed Rangehood which sits on the feature wall of Subway tiles.

The kitchen is Poggenpohl with its distinct Aluminium edges to all doors and the sleek Poggenpohl block handles. The main kitchen finish is Teak which provided a more organic feel in the living zone while Titan grey was used in the Butler’s Pantry. 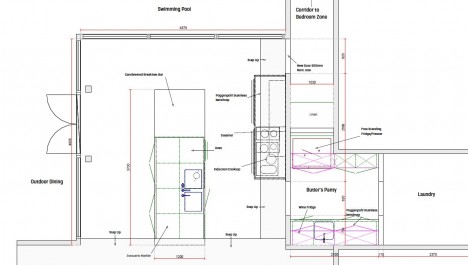