With a new grandchild arriving and more on the way these clients had a simple brief for our team “We need a bigger kitchen!”  It was obvious at the first site inspection that the existing kitchen was inadequate for such a grand house and that in contrast the dining space was huge so we swapped them over.  Such trusting clients are delightful!

The design process involved options for both the original space and the new one which spanned across four initial concept plans.  The client chose a galley style layout suited to the new, much longer, space and made it clear they liked white on white so Poggenpohl High-Gloss Lacquer was the obvious choice.

The client is somewhat of a Master-Chef and wanted plenty of flexibility plus cooking power so they attended our cooking demonstration which was great in that we established all the appliances to be included.  She opted for the Neff flexi-Induction cooktop with two accessories: Induction Teppan Yaki and Induction BBQ.  With a top temperature of 300degrees and the best Self-cleaning system on the market the Gaggenau oven was a simple decision which led us to the Gaggenau Combi-steam and Warming Drawer.

We supplied a Neff dishwasher with time-light function (a laser beam onto the floor to show how long is left in the cycle) and a Sirius range hood with remote motor for silent exhaust operation.

The kitchen has overhead cabinets with plenty of storage and automated lifting doors so they can be closed even by someone who is vertically challenged.  To keep the brief of White on White we used an incredibly strong 12mm Dekton bench which can stand up to the highest temperatures from the oven and red wine spills which are inevitable in the heart of this hard-working family kitchen. 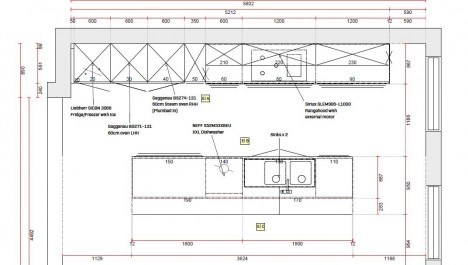